What You Need to Know Crosstalk

The industry has been predicting the growth of 10GBASE-T for years, and it’s finally happening. More networks are planning 10G migrations. Why? Due to demand from more advanced devices, users and applications. But new concerns come into play with this Ethernet standard. Crosstalk is a complicated subject to grasp, especially where the “Near” and “Far” ends are. In reality both end of the cable are both! They are only reference points to demonstrate where the signal is originating from for the purpose of the test…

The first diagram in this article shows exactly what happens, and how the “concept” of what is the Near and Far ends depending on which end the signal originates from. The diagram show a cable that is tested from either end and where the two ends are and where the NEXT and FEXT signals are in relation to the originating signal. When a signal legitimately travels down a pair of wires in a cable the signal emerges from the other end as it is supposed to, but the field that the signal creates around that pair “bleeds” over to the other pair in the test. The crosstalk creates a certain voltage in that wire that will emerge out of both ends, the near end and the far end. The following sections describe the different types of crosstalk and what the measurements mean.

Near End Cross Talk (NEXT)

The technical definition is “Interference between two pairs in a cable, this is measured at the same end of the cable as the “interfering transmitter”. What this really means is that one pair can interfere with another pair at the end that is doing the transmitting at the time. In reality the transmitting cable will interfere all the way down the cable to the other end, but the interference will be the greatest at the end where the interfering signal is transmitted from, called the “Near” end.

As an example, a cable can be plugged into a network switch and that switch is sending data (sending an electrical signal), that electrical signal will travel down the transmit pair interfering with the other pairs in the cable at the connector. That is where the NEXT measurement is taken, it is one of the most important measurements when testing a cable (except for Power Sum NEXT), it is a fairly conclusive test for the actual manufacturing quality of the cable itself or whether the cable itself is damaged. One of the causes of NEXT is the way that the pairs are inserted into the connector itself, if the individual pairs are not twisted right up to where they enter the connector then there is a potential for crosstalk issues, commonly found with homemade cables.It’s hard to make cables correctly and the temptation is to untwist the pairs more than they should be to make the connector fit easily, but this will introduce a potentially unacceptable amount of NEXT interference.

This is the same as NEXT, but is a calculation of the sum of unwanted signals from all the other pairs (in every combination) in the cable that affect the “victim” pair. Standards such as 10BASE-T and 100BASE-T only use two pairs in a cable, but the 1000BASE-t standard uses all four pairs in a network cable, which is where the Power Sum figure may be more relevant. 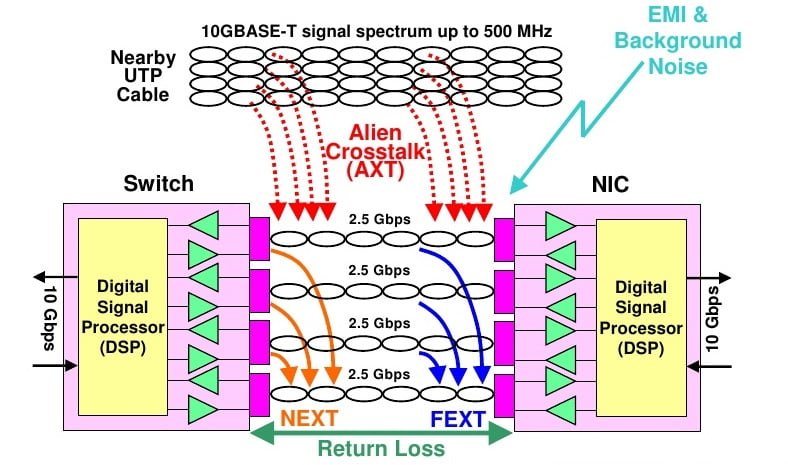 A cable that passes the PS-NEXT test should deliver superior performance for Gigabit and ten Gigabit networking deployments or any other network protocol that uses simultaneous parallel transmission. Using the PS-NEXT test cables can be “graded” rather than just being given a Pass or a Fail score.Cable grading is measured, in decibels, at a variety of frequencies that fall within the operating bandwidth of the that cable. There are 7 grade levels each one of which is 3db wide, the higher the grade the better the performance of the cable. The 3db measurement is in the NEXT/PS-NEXT margin at 100Mhz and a signal power difference of 2X.

This measures the sum of the unwanted signals from pairs on the far end onto a pair on the near end.

What is Alien Crosstalk?

Why is Alien Crosstalk Bad for Today’s Applications?

In high-speed, high-bandwidth applications – used today to accommodate more users and more devices – alien crosstalk can cause many problems. In a cable bundle, it’s possible that cable pairs in one cable pick up interference from pairs of another cable. The digital signal processors (DSPs) used in 10GBASE-T architectures can’t remove unpredictable exterior noise. Noise sensitivity increases at higher frequencies, such as 500 MHz, which is the highest frequency of Category 6A cabling. This interference isn’t just a nuisance; it has the potential to shut your entire network down – which leads to unplanned downtime, financial losses, a productivity nosedive and unhappy users. 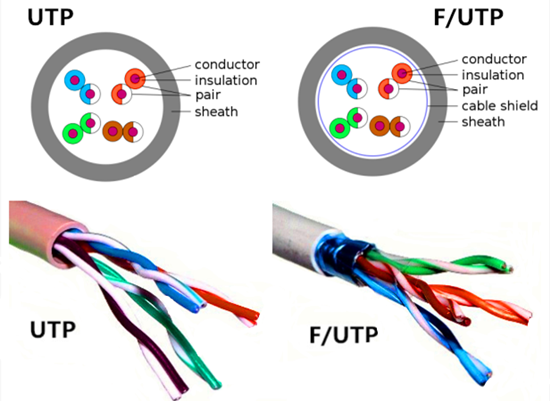 What Do Standards Say About Alien Crosstalk?

Here are a few reasons why Category 6A is the best choice: